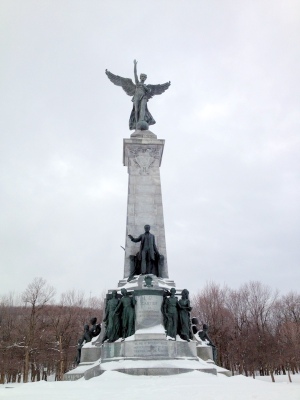 Five years after the Taylor-Bouchard commission, the minority PQ government in Quebec is working on a Charter of Quebec Values which would prohibit public employees in public offices, public schools and hospitals from wearing religious headwear and symbols. The initiative was “leaked” on August 20 as an obvious trial balloon from Marois’ team, and is no doubt part of a larger strategy to set the agenda for a looming provincial election late this Fall or next Spring. As expected, the news provoked  knee-jerk reactions from the Anglophone press:the National Post, the Toronto Star, the Montreal Gazette and the Globe and Mail all spoke of xenophobia and discrimination, and raised the spectre of future constitutional battles around the yet unknown Quebec Charter of Values and the Canadian Charter of Rights and Freedoms (this editorial cartoon from the Toronto Star sums it up nicely: http://www.thestar.com/opinion/editorial_cartoon/2013/08/22/editorial_cartoon_for_aug_22_2013.html).They all see this future bill as another conspiracy from an abhorred political party to awake a dormant sovereignty project in Quebec. They might not be wrong, but their analysis lacks finesse and is mostly based on a disproportionate emotional response.

The Francophone press in Quebec, even the usually more sovereignty-leaning Le Devoir, has also raised serious doubt about the viability of such a charter, and is well aware of the electoral opportunism which carries it. But they make sense of it in the more immediate framing of a coming election before diving into a deeper sociological analysis.

Politically, with 54 seats at the Assemblée nationale (63 is needed for a majority), the Parti Québécois needs to obtain the support of the Coalition Avenir Québec (CAQ, 18 seats) to neutralize the Liberals (49 seats) when they present new legislation. While the Liberals pride themselves on an strong economic platform, the PQ has always defined itself as a value-based political party. CAQ, a new party whose membership includes the bulk of the old Action Démocratique du Québec (ADQ), a right-wing party, tries to address both the economy and the distinct values of Quebec in its program. In 2008, the ADQ played a pivotal role in the “accommodements raisonnables” controversy which gave birth to the Taylor-Bouchard commission. Consequently, for internal coherence’s sake, they have to support a charter of values which they stridently demanded in the past.

The Marois government needs to steer the coming electoral debates away from the economy — the Liberals’ strong suit — because its record in the fields of economic development and job creation is less than stellar. With its project for a Charte des valeurs québécoises, the Parti Quebecois knows it can surf on the wave of an emotional controversy that polarizes the Quebec population in its favour, with the added bonus of a backlash from the rest of Canada, which will strengthen its constitutional posturing. The debate has also a strong regions-vs-centre component. The greater Montreal area is overwhelmingly Liberal, and the urban population of the island has a long tradition of accommodation with religious and cultural minorities. Not so much in the rural regions, where the population is far more homogeneous, particularly in the eastern part of the province, a PQ stronghold.

Strategically, the PQ move is crafty — and successful. A recent poll (August 26th) shows that 65% of the Francophones in Quebec are in favour of a charter of values. While the popularity of the PQ was lagging far behind the Liberals in June, they have gained 5 points and are now only 4 points behind, with 32% against the Liberals’ 36% in vote intentions.

That’s for the local political context. At a deeper level, the Charter of Quebec Values seeks to address a more fundamental issue, that of the laïcité of the state. The term laïcité is particularly difficult to translate. We tend to equate it with secularism, but it has a distinct history steeped in French republicanism, a strong political trend within the PQ. As John Bowen argues, laïcité “remains one of those essentially contested concepts that is politically useful precisely because it has no agreed-on definition.”

As a matter of fact, the future Charter of Quebec Values, until a few weeks ago, was called Charte de la Laïcité.

Beyond the obvious political opportunism, why is it so important for the current government to revisit such a divisive issue? As one columnist put it, the Charter is a bad solution to a false problem. The PQ lacks the courage needed to address the real issue here: the wearing of the burka. In the context of the increased paranoia against Islam that has permeated our media since 9/11, Islam has been closely associated with inequality between men and women, a central value of the PQ and the Quebec population. The PQ electoral program of 2012 clearly stated that la liberté de religion ne peut être invoquée pour enfreindre le droit à l’égalité entre les hommes et les femmes (freedom of religion cannot be invoked to infringe on the right of equality between men and women). In its aspiration to reaffirm the distinctiveness of Quebec values from the Canadian ones, the PQ draws from the French experience in legislating  against the wearing of religious symbols in the public space.

Since to legislate against one religion at the exclusion of others would have been rejected massively by the population, Martin Drainville, the Minister responsible for the Charter project, has disguised the target in a larger sweep that includes all other religions. The project will most likely fail because it includes too many exceptions, beginning with the cross at the National Assembly, considered as a patrimonial object, not a religious one. Furthermore, while the wearing of religious symbols would be forbidden for civil servants, it would be permitted for elected officials, an incongruity that has been highlighted by many commentators.

I believe the more fundamental issue is the instrumentalization of laïcité in an attempt to legislate identity and further a nationalist project. The jurist Daniel Turp presented last winter a project of Charte de la laïcité which began with the statement that Quebec is a secular State. This is false. As Jean-Pierre Proulx said in Le Devoir, it should read that the Quebec State is secular, which is a quite different story. Quebec is made up of believers and non-believers, Muslims, Christians, Buddhists, etc. It is the State that has to be secular, to be neutral in matters of religion. And it has been for quite a while. Between the existing Canadian and Quebec charters of rights and freedoms (by the way, the Quebec one pre-dates the Canadian one), freedom of expression and of religion are already well protected in Quebec.

We should wait until September 9th, when the text of the proposed bill will be revealed, to pass judgement on the initiative.  I am convinced it will prove, once again, that nationalism is an insidious social poison. Any nationalism. Even the more subtle one offered by our royalist, militaristic Harper. But that is another story.